Here’s why the NHS is under pressure 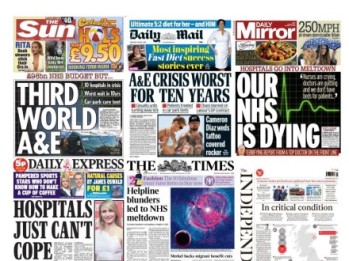 You’ve all seen the headlines.

I was talking to someone the other day about the yearly budget of the UK’s National Health Service. they were pointing out that the cost per capita (per person) is actually very low compared to other countries and that that’s the main reason for the system being under stress. Although he obviously makes a very valid point I feel he’s missing something fundamental that many people miss when they discuss Governmental spending on Health services and ways to ease the pressure on this system. The answer is you.

Using UK figures for England, Northern Ireland, Wales and Scotland the total NHS budget for 2015 was about £116 billion, or 15% of the Government budget. Now, whether you look at per capita spend or not, that’s a fair chunk of cash. As an aside; Total government health spend was nearer £138billion.

Let’s have a look at population spend and how you make your choices;

Total UK family leasure/gym membership and activity spend was £4.3 billion in 2015 (last figures available). The UK supplement industry was worth about £700million in 2009 (last figures I could find but we can assume this has shot up in the past few years so let’s say £1.6billion in 2015) Now I’ll be generous and add organic food spend at £1.9billion.  (That’s £1.9billion out of a total food spend of £112billion btw..only just over 1%) Now let’s be very generous, as the report doesn’t break the £112 down, and say £60billion of this is healthy food that is not being wasted.

That’s a total spend on “good stuff” of £65billion or so. As an aside; I have included the supplement industry spend as it shows the intent of doing something about your health, we know that 90% of the products they sell have no benefit but that’s not the point of this blog post.

On the other side of the scale we have the following;

Fast food spend was an amazing £29billion in 2015, and rising every year.

Fizzy drink spend was £15billion last year. (Admittedly this includes 0 calorie drinks but it doesn’t break it down and it’s definite that they are not “good for you”)

Crisp (chips for those in the US) spend alone was £2billion last year.

Sweets, and other confectionary not including crisps etc, are worth about £6.5billion.

So I can stop counting there really as we are already well past the £65 billion on the “good” list having hit £68billion without putting any effort in. And this was me being very generous and ignoring unused gym memberships and food waste and all that sort of good stuff.

So the spending figures pretty much show that British people on a whole are pretty bad at making decisions and tend to spend more money on things that are clearly bad for them than they do on good stuff. And I’ve not even looked at behaviour!

Right, so to go back to the NHS spend;

£6 billion a year in 2009 was spent on cancer care. We know that a lot of cancers have a causal relationship with people’s food and lifestyle choices but let’s estimate this nice and low at £1billion.

DIRECT obesity and overweight cost to the NHS was 5billion in 2007. We know this has risen dramatically in the past 10 years so and some studies have even costed this at £16billion (if we include the cost of treating Type 2 diabetes)

Direct costs associated with smoking cost the English NHS £2.7 billion in 2015. If we say the same % goes for Scotland/Wales and Northern Ireland we can estimate this at just over £3 billion a year.

So there you can see that approx 20% of the total NHS budget is spent on treating completely self inflicted illnesses. YOU make the choice to be unhealthy and then complain that there isn’t enough money in the NHS for what needs to be done (paying Drs and nurses at a decent level for one, shortening the waiting lists etc.).

Here’s one Dr who’s getting paid.

Imagine how much better the NHS would be if you stopped hitting that self destruct button everytime you shop? Imagine how much money you could safe if you cut the crap out of your life a little bit?

Again, I’ve not taken into account lost productivity etc. I’m not telling you that you’ll feel better and life longer, healthier, lives if you make better choices. I’m telling you that you are costing yourself a fortune and destroying your, once proud, healthcare system.

Take care of yourself and get in touch if you life in Edinburgh and could do with some help making better choices;